After not doing any competitive rallies in 2018 it was time to bolt the sump and bell-housing shields onto the Sabre Six once again. I did several HRCR Clubmans’ rallies back in 2017, so we entered another of this year’s HRCR events, the East Anglian Classic at the end of June based in Bury St Edmunds.

Navigator this time was Brendan Gibbs. Brendan and I have done several longer events in the distant past - three Le Jog Touring trials and several gently-competitive Classic Rally Tour rallies (the ones Geoff Cooper used to do the results for) on the continent – but the last of these was way back in 2007. I know from experience that these HRCR Clubman rallies, although non-damaging road-based events, are very competitive and are all about the navigation, both plotting and then driving the route accurately and to time. The precision of the top crews is amazing (that includes you, Gavin & Carrie!) but Brendan especially was coming to this event as a novice so we set our sights accordingly. Our target was to concentrate on the route, to get all the plotting done accurately on our OS maps and to hit every one of roughly 30 Time Controls and complete each of the 11 tests correctly without scattering any cones. This was a big ask, let alone worrying about to-the-second timing which we would only do if the workload allowed.

The drive up to Bury St Edmunds from Hampshire on the Friday afternoon was long, busy and very hot as the weekend coincided with the hottest days of the year with temperatures in the 30s. I’m always on edge in a 55-year old car in queuing motorway traffic in those temperatures, but the Sabre Six behaved itself the whole weekend. Whilst waiting for scrutineering in Bury the Chief Marshall wandered over, delighted to see an early Sabre again as he and his mates of a certain age in Bury St Edmunds had fond memories of Sabre Sixes. He knew Graham Warner, proprietor of Steering Wheel Garage, a Reliant Dealership in the town in the 60s who owned and prepped a Sabre Six, WGV 287, competing on the 63 RAC and 64 Monte Carlo rallies. This one in fact: 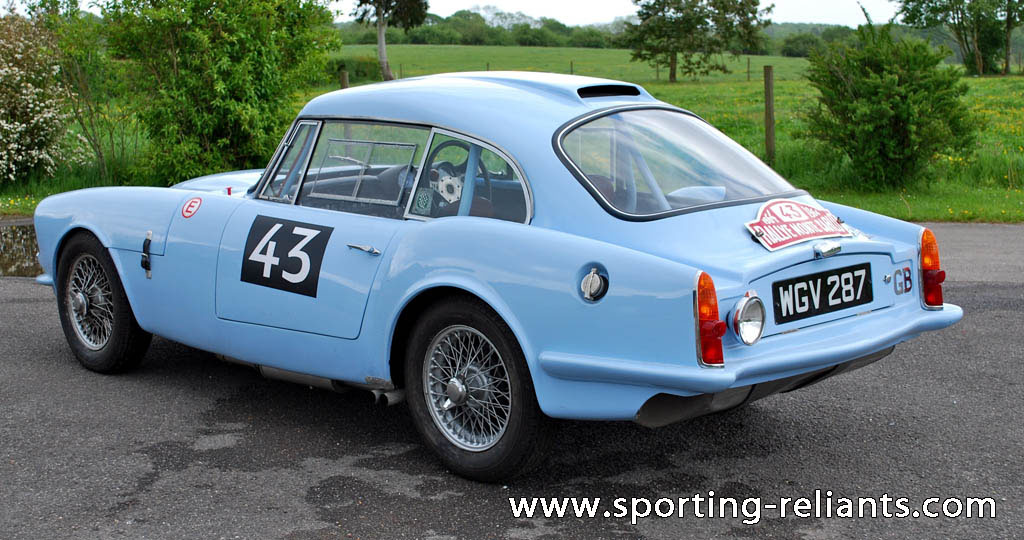 Rally HQ, before the start:


Anyway, to Saturday morning. Unlike some events where you get the navigation instructions the evening before, the East Anglian Classic issues them strictly one hour before your start time with no extra allowance for novices. But it’s a level playing field, so at 08:30am it was an intense 60 minutes of plotting over bacon butties and coffee. We were provided with instructions for 5 Regularities covering most of the rally, and although Brendan and I had practiced plotting in advance this is most definitely a skill which improves with experience. So precisely an hour’s intense concentration (to the minute, before we ran out of time) was followed immediately by getting the time card signed, dashing to the car and legging it to the first Regularity start. We were satisfied we had three and a half of the five Regularities down accurately, enough to get us through the morning. The rest would have to wait until the lunch stop.

If you're wondering what these plotting instructions comprise, here they are for Regularities 4 & 5:


Setting off from Thurston near Bury the first Regularity of well over an hour took us, based on a combination of spot heights and grid lines, via 5 TCs to the finish near the village of Brome. We found all the controls ok, but soon realised that on this first rally together for many years we’d have to forget about timing. So whereas the top crews were dropping – literally – just a second or two at each TC, we were plus or minus 30s, often more, each time. But in fact, we were reasonably satisfied with that so long as we didn’t stray off route.

From Brome it was on to nearby Thorpe Abbotts, an old WWII airfield housing the 100th Bomb Group Memorial Museum, for two tests and the morning coffee halt. We negotiated the tests (which were great fun!) on mainly gravel and rough concrete ok, as always trying to balance going for it against breaking something on the car.

More plotting in the sunshine, instead of our coffee halt:


From there it was on to Regularity 2 which again was fine, followed by three more tests back at Thorpe Abbotts in the increasingly baking heat – one along the old bomber runway, with two the reverse of the earlier ones. We weren’t setting the tests alight, but we were completing them correctly with respectable enough times without clipping any cones. Three more TCs followed on Regularity 3 near Diss, and although once again our timing was out we visited each TC correctly before heading to lunch at Tibenham. Fortunately the shade provided by the trees in the car park gave a welcome break from the heat and stopped the interior of the Sabre from getting too unbearable.

We still had more plotting to do for the afternoon so lunch was a quick sandwich grabbed whilst hunched over the maps again. We had 50 minutes and we used every one of those, just managing to get the final clues plotted as the clock ticked round to our out time and the next Regularity centred on Larkshall. Still, it paid off as we again got each of the four TCs despite somewhat wayward timing before Tests 6 & 7 at Larkshall Barns, a mixture of tarmac, gravel and bumpy farm tracks. Then it was on to Test 8 at Wretham Park for a 1.85 mile thrash in the heat around the fields consisting of sandy soil, mud and tracks through the stubble.


Regularity 5 was 40 minutes of grid squares and directions before heading back to Larkshall Barns and Wretham Park for a repeat of the earlier tests. The penultimate Regularity was a short off-road one set at 30mph with two Time Controls, straightforward to navigate but the rough surface meant only 5 crews achieved less than 5s of penalties here. Finally, Regularity 6 was a plot and bash handed out just before the off, based on reasonably straightforward pictorial grid-square clues which took us back to the finish at rally HQ for some well-earned refreshments and food.


So our verdict on the rally? There was a relatively modest entry of 36 cars, with most of the crews having far more experience than us – in many cases years of road rallying behind them. As a first rally together for well over 10 years, Brendan and I concentrated on the plotting and navigation to the exclusion of timing, with the aim of not missing any controls or messing up the tests. There’s little point in busting a gut to be within a few seconds at most controls, only to take our eye off the ball and go off-route somewhere dropping many minutes, or missing controls completely and picking up bucketfuls of penalties. That’s a fair ask for a novice crew, and we achieved this so we were pretty satisfied. In fact we only had two or three wrong-slots all day, each one quickly spotted and rectified before any harm was done.

Seven cars failed to finish, not helped by the intense heat, but we still finished a long way down the order. Still, putting a positive spin on matters the Sabre Six was almost the oldest car in the rally, never missed a beat, and we finished only 9 places behind a former F1-driver (Martin Donnelly, in the lovely 1968 Lancia Fulvia). And morally, we also finished ahead of the joker we heard boasting that he used his Tom-Tom to get back on route when they were hopelessly lost. What’s the point - why do it?

Overall it was a great event and we loved it. It was very well-organised, friendly and we must also give a mention of thanks to the marshalls who stood outside in the baking sun all day to allow us to enjoy our sport. A quick inspection of the results showed that, having not missed a single control, had we focussed on timing to even a rudimentary extent – just to eliminate the wilder excesses - we would quickly have started to climb that finish board. That will have to be the target for next time!
Last edited by chrisgallacher on Tue Aug 06, 2019 4:09 pm, edited 1 time in total.

Having navigated a couple of times for a certain G Cooper, I know how hard it can be. Using a TomTom? Should be tarred and feathered for that

Well done Chris.
You've reminded me why I stick to the Tours and not the rallies!!
Philip

Well done Chris and Brendan. Sounds like a tough event.

What a wonderfully versatile car your Sabre is - tough, gritty competition car one month, luxury tourer a couple of months later.

Well done Chris good you are keeping the flag flying. Your reports description, bring back happy memories! Hopefully I may join you on one of these types of rallies in the not too distant future. It’s been too long since I and the cars did any proper rallies. See you in a few weeks in Kent.
John

I thought for a moment you said "luxury tourer" there Tony.

Well done Chris and Brendan, good write up and I'm glad to see the organisers managed to secure some other Test venues for this year's event

GavinR wrote: ↑
Tue Aug 06, 2019 1:29 pm
Well done Chris and Brendan, good write up and I'm glad to see the organisers managed to secure some other Test venues for this year's event

I recall you said you felt the tests on last year's event weren't the best Gavin.

This time round I think we both felt that they were good - not car breakers, but nice and long and with plenty of room and the right sorts of surfaces to get things sliding around. And plenty of variety.

Yes - last year all the Tests were at Thorpe Abbotts, 3 layouts done 3 times and we prefer some variety!