by larrylamb11
In the process of endeavouring to make the overdrive work on my SE5a. Have repaired the majority of the wiring (see 'Rabbits ate my overdrive thread' !) and confirmed I now have a switched 12V ignition live from the loom, operated by the dash overdrive switch, plus a permanent 12V ignition live from the loom (for the reversing lights) and the associated wire to feed the rear lights (not that they work yet - that's another job for another day!)..... so now it's time to move onto the inhibitor switch on the gearbox.

As you can see the switch is mildly crusty, although it does work of a fashion and makes both contacts. I need to improve the action however as it's too stiff / notchy, presumably owing to lack of lubrication / corrosion. Any tips for stripping these down? presumably they are pretty delicate and need to be treated with care?

In addition, is the switch toggle supposed to be bent like that? or straight? I don't have a new one to compare with so I don't know what it should look like. It's entirely possible it's got bent from being too stiff or hanging up when the gears have been shifted.

Second, what is the little black plastic collar for? Is that the remnants of a rubber boot retainer? or should that collar engage in the shift rod lever and provide a bearing for the toggle? or does it do something else?

Does anyone have a picture of a complete assembly on a 'box out of a car so I can see what it should all look like? 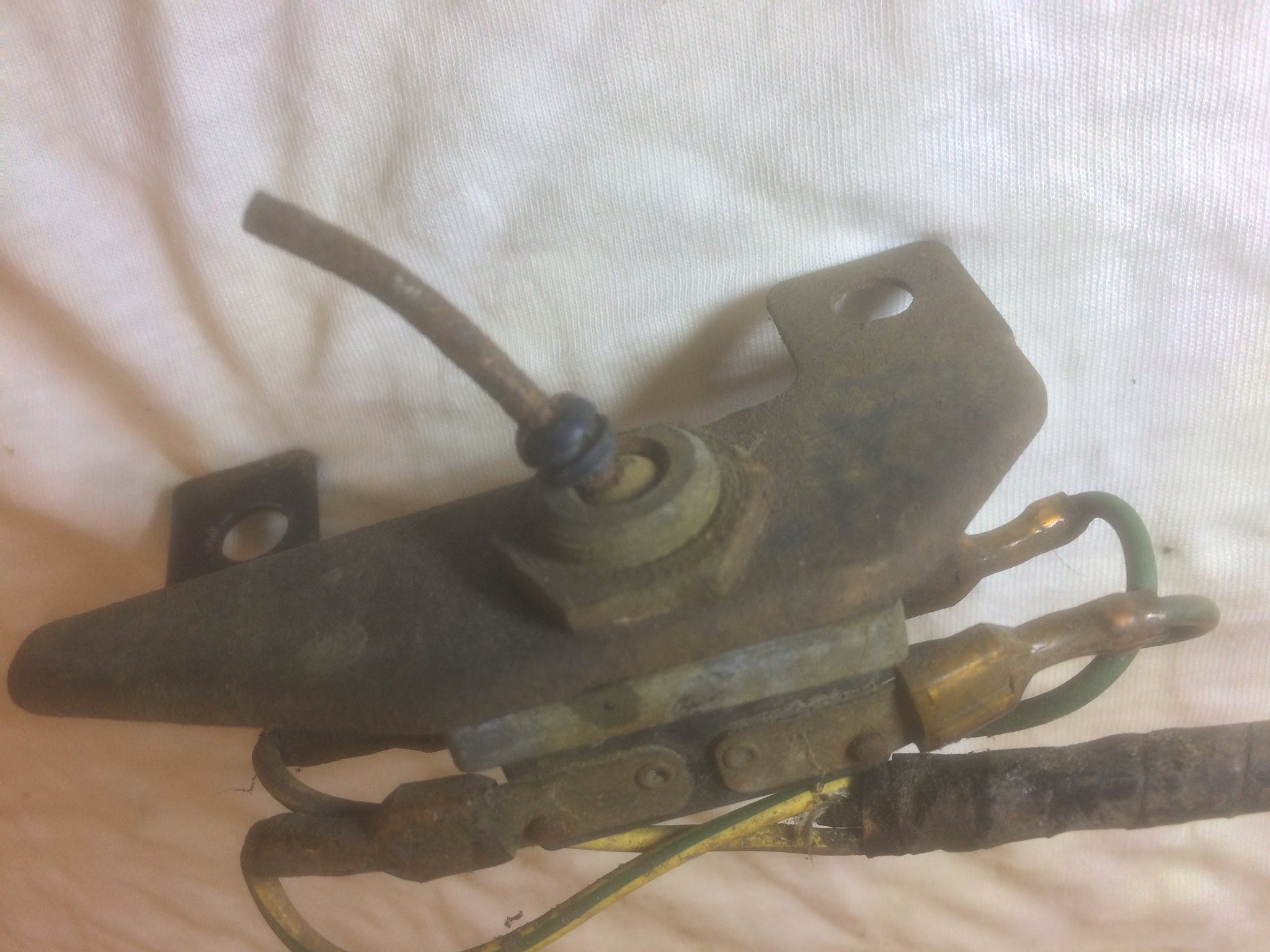 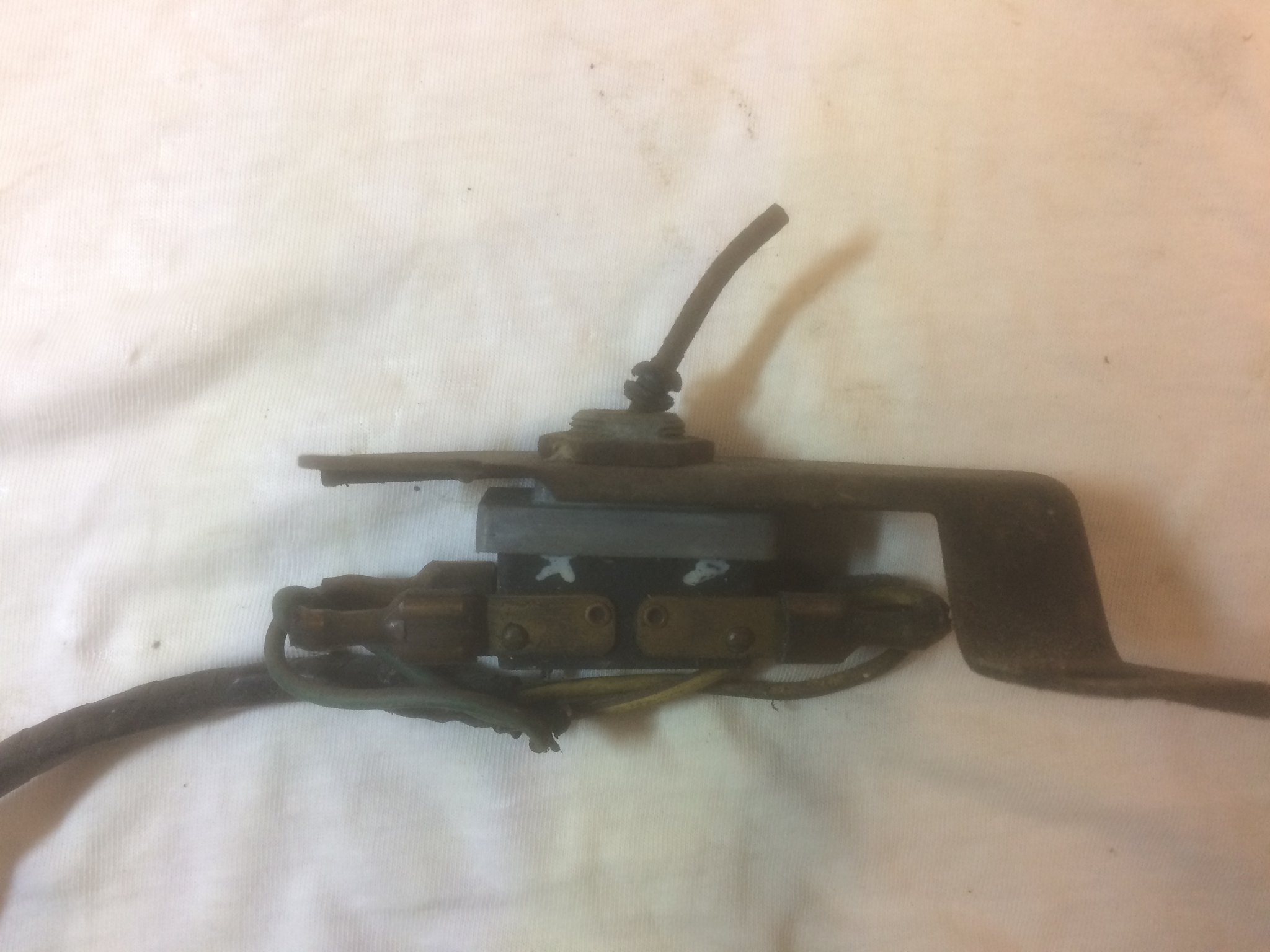 by philhoward
The switch lever engages with a slot in the fork attached to the gear linkage - I assume the grommet is there to (ideally) engage in that to reduce any slack in the switch/mechanism. The lever shouldn't be bent though..but it looks like a witness mark just below the bend, where the lever was working (so it could have been bashed during a previous removal/install)?

Remanufactured switches are (were?) available but aren't the same quality as the originals (in fact they have a habit of returning to their component parts quite easily) so I'd try and rescue the original if possible with a little penetrating fluid/contact cleaner to try and free it off a little (but I think they're supposed to have a slight amount of detent - the only one I ever played with was a little looser than I think it should have been). I think they're crimped together and contain magical Lucas springs (those which vanish into the darkest corner of a garage once they see daylight) so probably only to be opened up with great care and a huge amount of luck.

by Oldconn
HERE YOU ARE:

by scimjim
also be careful when refitting the nut to secure it to the bracket - the top section of the switch is made of monkey metal and will shear the threads straight off if overtorqued.

by larrylamb11
Ah, perfect, thanks for posting those pictures - that's much clearer. The little plastic collar on my switch could well be an old bushing for the fork then. Comments duly noted on straightness of toggle and vanishing 'Lucas springs' within! Will approach with due caution....

by larrylamb11
Progress. Switch stripped, cleaned and reassembled and now in fine fettle. I had to replace one of the switch contacts in the body as it was rather pitted / burned, but a short piece of peened copper rod did that job nicely. The switch is simplicity itself - a simple sliding contact operated by the toggle, which pivots in a ball/cup joint to give the three positions ON-ON-OFF, with a mild detente for each position. Some lightly applied Vaseline and grease should see it provide reliable service for a while.

Points to note -
The toggle itself (the metal bit with the half ball shape) should be straight, with no bends or deviation. If it's bent, there is a risk the toggle will rotate in the switch body when being operated by the shifter fork rather than slide the contact block and not complete it's contacts, or, more importantly, break it's contacts - the single most vital job this switch has to do is ensure that the overdrive solenoid cannot be energised when reverse is selected.
The top of the switch body (as helpfully pointed out by scimjim above) is made of malleable and delicate alloy. You don't need to take it off the bracket to refurbish it and it's best not to disturb the threaded nut if you don't have to. The switch is held together by the sides being crimped over the plastic body - this can be delicately un-crimped with careful use of levers. The less levering the better - bending back the sides the bare minimum to get the switch separated is the objective, as there is more chance of successful reassembly. Note the sprung loaded ball bearing in the base of the sliding contact - it shouldn't fly out as it isn't under much pressure, but proceed with due caution.
When re-assembling the switch there is a right way and a wrong way to insert the sliding contact block - get it the wrong way round and you risk energising the overdrive solenoid when you select reverse, which would be bad

NOTE: with the bracket laid out as below and as if viewed from the front of the car looking down from the engine bay, the switch toggle should be making NO electrical contacts when fully to the RIGHT and bridging the FAR RIGHT contacts (for reversing lights) with the toggle fully to the LEFT. With the switch toggle amidships and standing vertical the contacts for the overdrive (which are the spade terminals on the left hand side of the switch body) should be bridged. Double check this before assembly and crimping the switch back together again.

This is what the insides of the switch look like. The little black grommet-like thing is a nylon collar that slides over the toggle and engages in the fork of the shift rod to bush the action:- 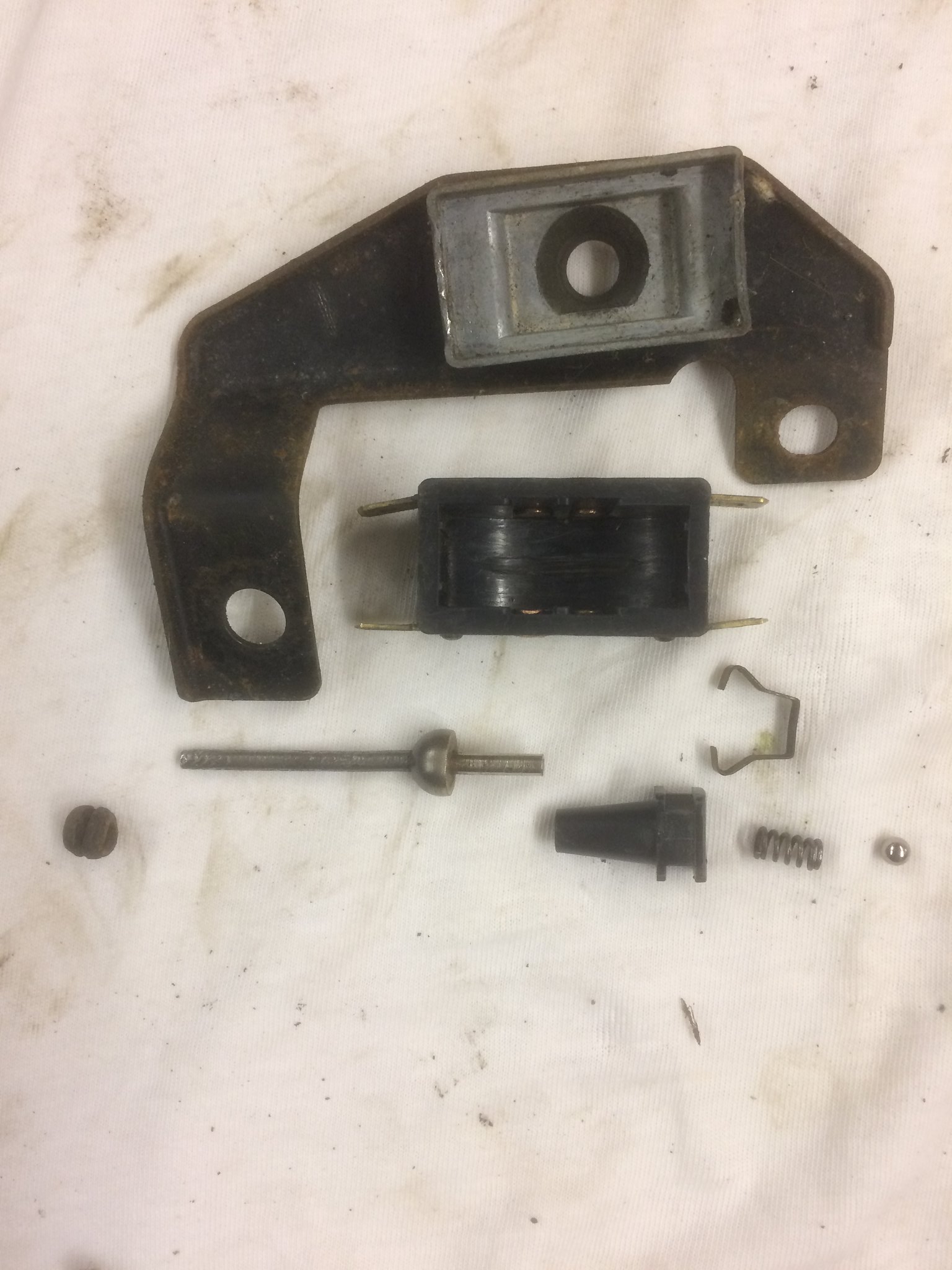 and this is the correct orientation of the sliding contacts - no contacts bridged with toggle to the far right:- 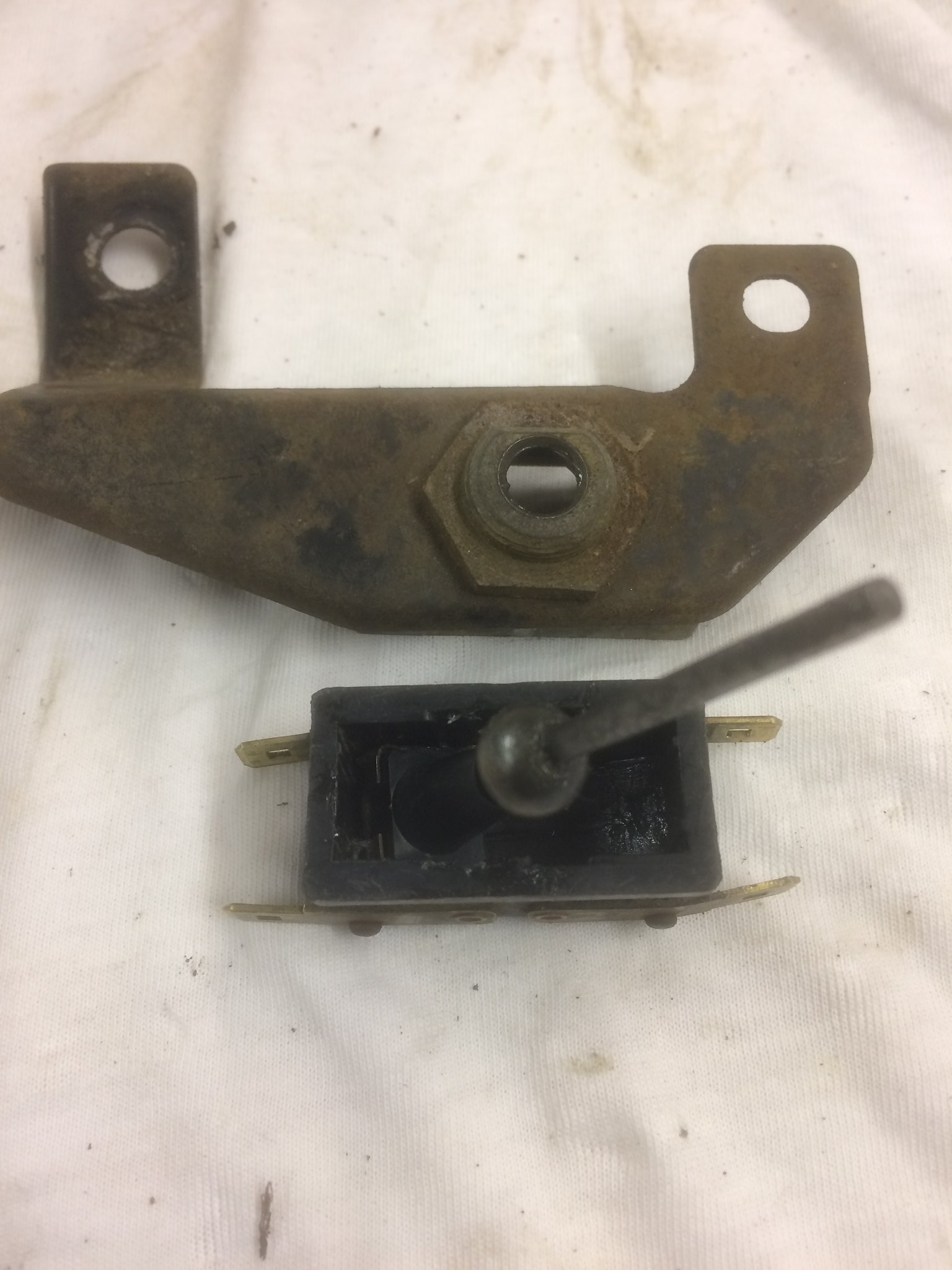 and with the reversing light contacts bridged with the toggle to the far left (movement exaggerated here for the purposes of a clear photo):- 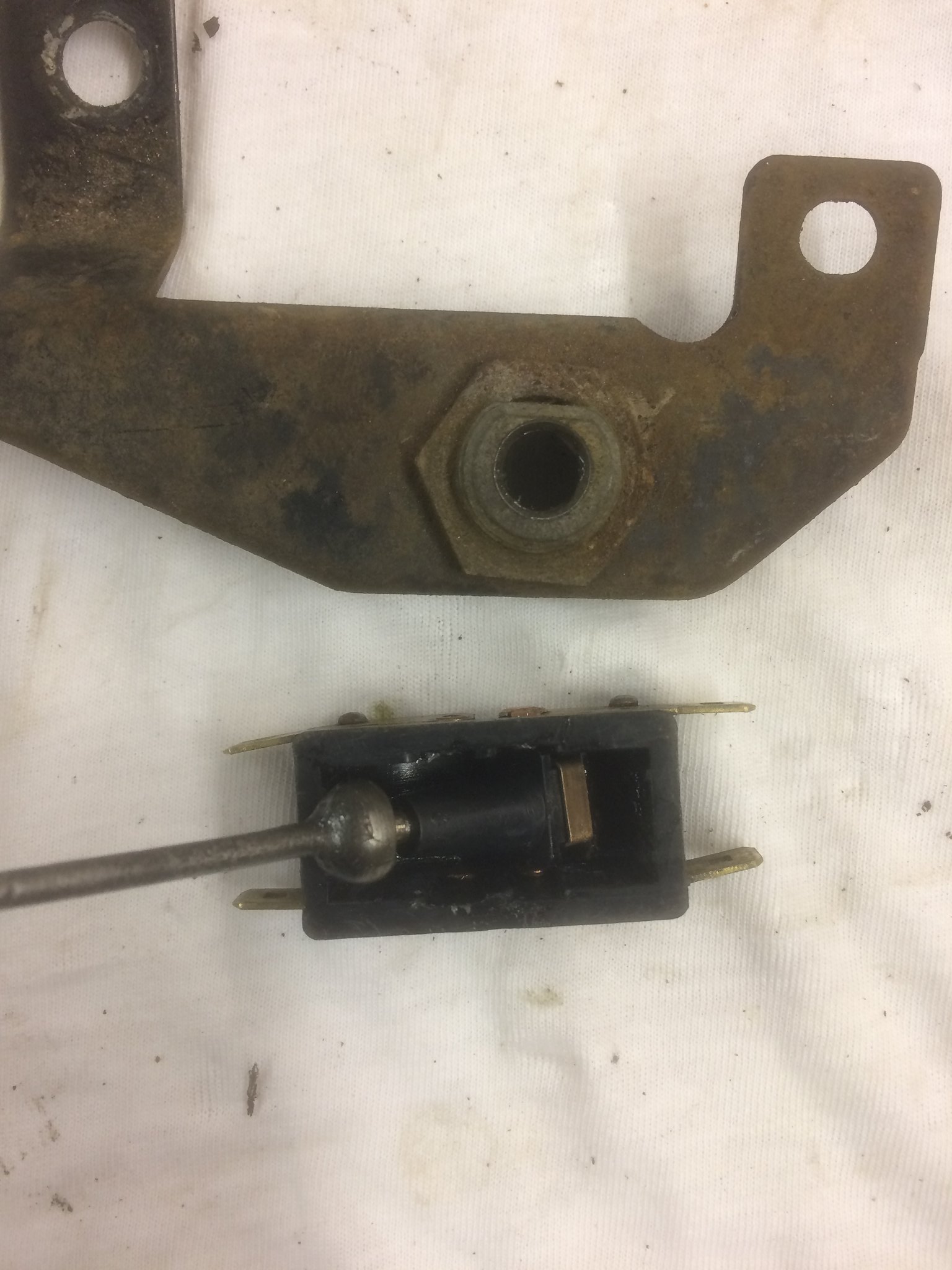 by b.c.flat hat
Crackin' result an' good write up, sticky this? Crusty.

by Oldconn
Perhaps merge the threads?

by Oldconn
Ah! The other one seems to have disappeared,Jim.

This thread is all over the place?????

Just clicked on your pictures and got re directed to another site an my laptop went ballistic????

Anyway, after it finally slowed down I got to see a few other pictures, including a vale seat regrinding mounting tool??, picture 5201, 5614, etc, they are all giving different numbers?.

by scimjim
No idea what’s going on - I copied this into FAQs as suggested. I’ll prune it tomorrow.

by GavinR
Tidying up the workshop over the weekend, I found the inhibit switch which came with my SE5a - it never worked so I never fitted it - I just have a Red warning light to remind me when overdrive is engaged

Having a bit of time on my hands, I took it apart and found everything shown above apart from the ball bearing (I don't think it fell out when I dismantled it !)
Mine also had a rubber boot between the plastic base and the metal cover - possibly the rubber grommet shown in the previous pictures is the remains of the rubber boot?

Chopped it up and bent it around the plaatic contact block

But it wouldn't contact both sides at the same time as the copper contacts were too worn
So I drilled them out and replaced with some M3 machine screws, after grinding the heads down to be slightly thicker than the copper contacts

The gearbox is shown in Reverse - the O and R on the bracket are to remind me which contacts do which function, not to show which way the lever goes!